Mable has printer’s ink in her blood. She does not remember a time when weekends and summer days were not spent at her family’s shop, S. M. Parks Printing Company, est. 1923, learning letterpress printing from her father.

In 1982, Mable joined the U.S. Navy. Being a daddy’s girl, pursuing a career in printing was a natural fit – so she enlisted as a lithographer. In her 21-year career, she worked in printing shops aboard ships and at shore facilities. Starting at the lowest enlisted rank, Mable earned promotions up to the rank of Chief Petty Officer, a source of tremendous pride and accomplishment. She feels a similar pride with each job she finishes.

Mable recalls a time when she was stationed aboard the USS John F. Kennedy, an aircraft carrier home-ported in Mayport, Florida. The JFK was sailing up the east coast to New York City to support Fleet Week, Fleet Week being New York City’s celebration of the sea services. The Navy takes great pride when invited to participate. Dozens of military demonstrations and displays are showcased throughout the week, as well as public tours of the participating ships. The JFK’s print shop was tasked with producing 50,000 “Welcome Aboard Pamphlets” to distribute to the ship’s visitors during the tours, an assignment in addition to the daily printing routine for the ship.

During the deployment to New York, hundreds of miles out in the Atlantic Ocean, the Xerox Docutech broke. Arriving at Fleet Week without the pamphlets was not an option. The JFK had to reach out to any facility that had equipment. Mable was chosen to accomplish this huge job. She was flown from the flight deck of the JFK to the USS George Washington at Norfolk Naval Station, Norfolk, Virginia, reporting onboard with a requisition for paper and a hard copy proof. When the JFK arrived in Norfolk before proceeding to New York, Mable was on the pier waiting with 50,000 “Welcome Aboard Pamphlets”. Nearly, 25 years later it remains one of the proudest moments of her career.

After retiring from the Navy in 2004, Mable continued her career in printing as a Customer Service Representative at Yale Printing & Publishing. She fondly remembers her first job at Yale as Associate Director of Production Operations, Frank Savino’s “Left Hand Girl”. Her work area was a small table to the left of Frank’s desk where they shared his phone and office supplies.

Having made tremendous progress over the past six years, Mable is currently Supervisor of the Customer Service Support Team. 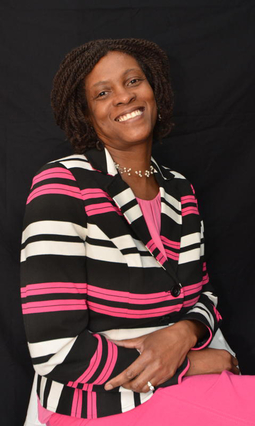