A lot has changed since John Poitras started working at Yale in 1996. John, who is currently a Production Supervisor at Yale Printing and Publishing Services (YPPS) started at Yale in the ITS Data Control Department. Back then, records and other operational data were stored on large tape cartridges. As part of his job, John would bring these cartridges “to a secure location” where they were stored in a big safe. After a short stint there, he began working at MIS Printing (now YPPS.) “I’ve been through the whole alphabet here at Yale. I started as a C&T Level A, worked my way up to an E and seven years ago became a manager,” said Poitras. Along the way John, who started in the mailroom, worked in bindery, then as a second-shift coordinator, and now works on the production floor overseeing digital and large-format printing while managing eight people and tracking YPPS’s entire inventory.

Today, John no longer makes covert trips to the safe room, which along with the building it was housed in, 155 Whitney Avenue, was torn down to make room for Yale School of Management’s beautiful new Evans Hall.  Tape is no longer used to store data, YPPS no longer has a second shift, paper mailings have been replaced with email, and print is now on demand. “Printing is never going away, but there are other platforms to share information (email, blogs, etc.) But people have gotten greener requesting all materials on thumb drives and double-sided printing,” said Poitras. YPPS keeps up on trends with two new additions to its’ portfolio: scanning and record retention services and mobile app development and e-publication services. “The scanning business is growing, departments have rooms full of records. We come in, scan everything and hand them a thumb drive,” said Poitras, who sees the business going in that direction.

Another change John has experienced over the years was transitioning from clerical to management. “When I first became a manager, I was good at coordinating people, but I had to put some relationships aside. It was a challenging transition, but got better over time,” said Poitras. John takes advantage of the ‘Managing at Yale’ courses and finds them helpful. His biggest challenge now, keeping everyone happy. “As a middle manager you try to cater to the needs of the organization while juggling the needs of the staff, but I enjoy being a manager and work with a great team. They make my job easy,” says Poitras.

Besides printing, Poitras and his team share a love of food. “We have a lot of ‘foodies’ here, and we are always talking food.  Food brings us together. I’ll cook something and bring in samples or share food magazines,” said Poitras. There is even discussion of a food contest to benefit a local charity.

The biggest change John experienced since coming to Yale was meeting and marrying his wife Judy. She recently retired, but was working in YPPS’s Digital Production Department when they met. They’ve been married for 8 years and live in Groton with their Cocker Spaniel Matilda.

John, who commutes in by train and shuttle daily hopes to finish his career at Yale. “Yale has changed quite a bit in the almost 20 years I’ve been here. It is still a top-notch institution that turns out some of the best talent in the world, and it is also a great place to work and grow as an employee. I’m proud to work for this university with all it has to offer,” said Poitras. 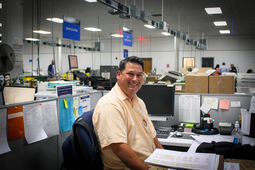