When John Heine first started working at Yale in 1983, email didn’t exist, Swatch watches were all the rage, and the average price of a Ford Mustang was $6,500. But that year also heralded great technological change, including the birth of the Internet, the first mobile cellular telephone call and Microsoft Word’s debut. Back then John worked in the computer room of Administrative Data Services (ADS); as a computer operator he would load card decks into a computer mainframe. His primary duties included printing hundreds of reports for the general accounting office that included records of money spent by any department across the entire university.

After 10 years in the ADS computer room, John moved down the hall to the now demolished, 155 Whitney Avenue building to the RIS department (later to be renamed Yale Printing and Publishing Services (YPPS). John worked on digital printing or taking hard copies or digital files and printing them on Docutech or Xerox machines.  “Back then, in the basement of 155 Whitney Avenue, we were busy because there weren’t many of us in the department, which was created mainly to support the Alumni Development Department,” said Heine. “It was a lot of fun back then, we were a small group and did everything by hand.”

John is currently a Digital Print Production and Auto Finishing Manager at YPPS, now located at 344 Winchester Avenue, where he claims not much is done by hand as there “are machines for everything. The massive School of Management building stands where the humble 155 Whitney Avenue building once stood. But, back in the 1980s and 1990s, Heine was a kind of print jockey learning all the new equipment and working the second shift from 4 to 11 p.m. During those years, two shifts were necessary because of the large volume of printing needed by the university. “We did a lot of course packets back then, and I remember we did tons of work for the Law School.  We’d have to copy these thick law books that would take 8 hours to complete,” said Heine. He also remembers when they would have to do manual finishing work after 5 p.m., his manager would send out for dinner or ice cream sundaes from Clarks Diary.

As the years passed, and Swatch watches gave way to wristwatch computers, and all the technology that started in 1983 drastically changed how work gets done, John continued to move up in the YPPS organization becoming a lead and then expeditor in the pre-press area. As an expediter, John reviewed files coming into YPPS, delegated jobs to the pre-press group, handled job tickets, brought jobs to the production floor, and most importantly acted as an information resource for the pre-press and design groups as to the best way to run a particular job.

Today, John spends a lot of time organizing job workflows – how a poster or booklet gets from the customer to the designer, to being a finished product. His biggest challenge these days is deadlines and the expectation of faster turnaround times. “Deadlines have always been a large part of the nature of the printing business, that is never going to change. But now with newer and newer technologies the expectation is lightning-fast turnarounds,” said Heine.

Yet technological change keeps the job fresh and exciting for John. “Things don’t stay the same very long which makes for a fun challenge. I like that. I like the people I work with, my clients and, I like working in this department,” said Heine.

After 5, John loves riding his motorcycle a Yamaha 1300, playing in an over 50 men’s soccer league, and fly fishing. He also enjoys coaching girl’s soccer in his hometown of North Branford where he lives with his wife Deborah and daughter Deanna. 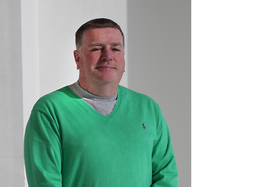