There is no more stressful time in higher education than commencement. Many departments spend months preparing the campus for this huge event, when thousands of graduates and their families converge on Old Campus. YPPS prints all of the diplomas and supporting materials for this event. While our team was preparing for the 2017 graduation ceremony, we were notified that one of Yale’s Honorary Degree (HD) recipients was the legendary musical genius Stevland Morris, also known as Stevie Wonder.

Mr. Wonder’s vision is impaired, so our challenge was to create all the printed pieces needed for commencement, but additional versions of each in braille for him.

What we learned was that braille characters take up much more space than a normal typed letter. Many of the pieces had to double in size to display the braille characters sufficiently. To troubleshoot this, we sent mock ups of past invites reformatted to the enlarged size. This helped us identify what the final braille pieces would look like.

Our strategy was to recreate everything in print on paper except the diploma and invitation. Our solution was imprinting braille onto a clear Mylar sheet and slipping it over the documents. By doing this, the official diploma and invitation remain intact when displayed, with the braille quite legible. The commencement booklet faced the largest transition. It had morphed from a 5.5” x 8.5” double sided booklet into an 8.5” x 11” double sided braille booklet. This meant each page had to have debossed braille buttons and also embossed buttons allowing the raised characters to be felt on both sides of the page.

Mr. Wonder was very appreciative of these efforts and thanked the University for making his Yale experience so special.

“You have always sung to us in the ‘Key of Life,’ while working to help the poor, sick and marginalized,” Yale President Peter Salovey said to Wonder just before presenting the honorary degree. “Whether you were ‘Living for the City’ or speaking up for ‘Misrepresented People,’ you brought us to ‘Higher Ground,’ with your incisive protest songs.” 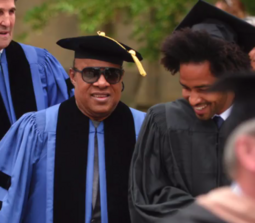