The invitation was designed by Maura Gianokos and print procured through Carmen Cusmano for Yale Office of Development, Medical School.  The Yale Medicine online portal project took several months and was developed by Jason England working closely with the Yale Medicine team last summer.  John Heine attended the ACUP awards held in Cincinnatti, OH in April and was there to accept these awards on YPPS’s behalf.  http://www.acup-edu.org/acup-home/2017-awards/.

Precision Paradigm Invitation - A Successful Event
Cornelia Evans, Yale School of Medicine, Director of Development, asked YPPS to design an invitation for a fundraising event that would take place at the iconic Hearst Tower in NYC. They were raising monies for women and children’s health specifically for early diagnosis and treatments to several types of cancers

The client wanted a high-profile design that was eye-catching and would peak the interest of potential donors. While it was a Yale event, the client wanted a distinctly different look from traditional Yale invitations and wanted to also somehow capture the architectural appeal of the Hearst Tower. The trifold invitation usies imagery that suggested women/children’s health and research, and also used a photo of the Hearst Tower. The die cut on the front of the invitation showed an architectural glimpse of the building, and as the invitee opened the invite, saw the full image of the building. The idea was sort of a ‘window’ into the future.

Yale Medical Group had been re-branding their identity to Yale Medicine (YM) for over 2 years, and with the project 90% complete their design firm unexpectedly closed. They needed help to centralize purchases and develop a print model that would exclusively manage the newly branded stationary (business cards, appointment cards, letterhead, e-letterhead and envelopes), and embroidered lab coats. This huge undertaking needed to be available to over 4,000 users by August 31, 2016. YM came to YPPS in hopes that this type of project was achievable. After their first meeting, YPPS gladly took on this project.

As the project commenced, YPPS established an in-house team consisting of a project manager, designer, outsource procurement, a customer service representative, and a digital production operator. This team worked tirelessly to overcome the hurdles of time, technology, and a new brand identity. On September 1, 2016 the portal was successfully unveiled to the public. 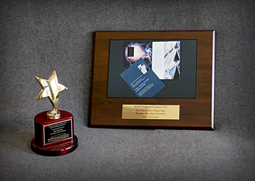